Bitcoin has corrected by more than 4 percent from its local top near $9,500, but that has not deterred traders from increasing their exposure in the cryptocurrency’s derivatives market.

Market analytics firm Skew noted that open interest in all bitcoin futures rose to nearly $3 billion, logging a 30 percent increase in just a week. The rise appeared two months after Black Thursday, a mid-March event that saw bitcoin crashing by more than 50 percent in a brutal sell-off. The dump also led the amount held by futures contracts lower.

Open Interest, or OI, reflects the number of open/unexpired contracts in the futures market. These contracts can be long, wherein traders bet on the surge in the underlying asset’s price, or short, in which they aim for the price to decline – until a specific date/time of contract expiration.

Bitcoin followers perceive a higher OI as a metric to gauge institutional interest in the cryptocurrency sector.

But nonetheless, the total number of open futures contracts does not affect the price behavior in spot markets – it merely shows the cumulative capital that enters the derivative market from both bullish and bearish investors and leaves it after the exchange settles the contracts in the US dollar, not bitcoin.

Per the latest delta readings highlighted by a prominent, pseudonymous analyst, futures contracts holding a bullish outlook (long) are rising faster than those with a bearish bias (short).

The data shows that institutional traders are majority long on the bitcoin’s spot market, meaning they expect the price to go up ahead of their contract’s expiration date/time. With OI on the rise alongside, both the indicators paint a rosy market outlook for bitcoin in the near-term.

Nevertheless, the derivative metrics are rising are not inspiring a similar move in the spot market. As the pseudonymous analyst noted, it’s tough to maintain a bullish bias when the bitcoin price is either flat or trending down in the face of “a delta that is skewed long and OI climbing.”

The statistics at first appear strange. A drop in the asset’s spot rate alongside a rise in OI should reflect an increase in short positions, per the textbook narrative. But with traders still long, the price-OI relationship shows they are overly optimistic about the asset’s short-term bullish bias.

The divergence in bitcoin’s spot and derivative markets comes only a week ahead of the cryptocurrency’s mining reward halving. On May 12, a pre-programmed algorithm within the Bitcoin code will cut its daily supply from 1,800 BTC to 900 BTC. As the previous two events of the same nature resulted in enormous price rallies, traders anticipate the same from the third one. 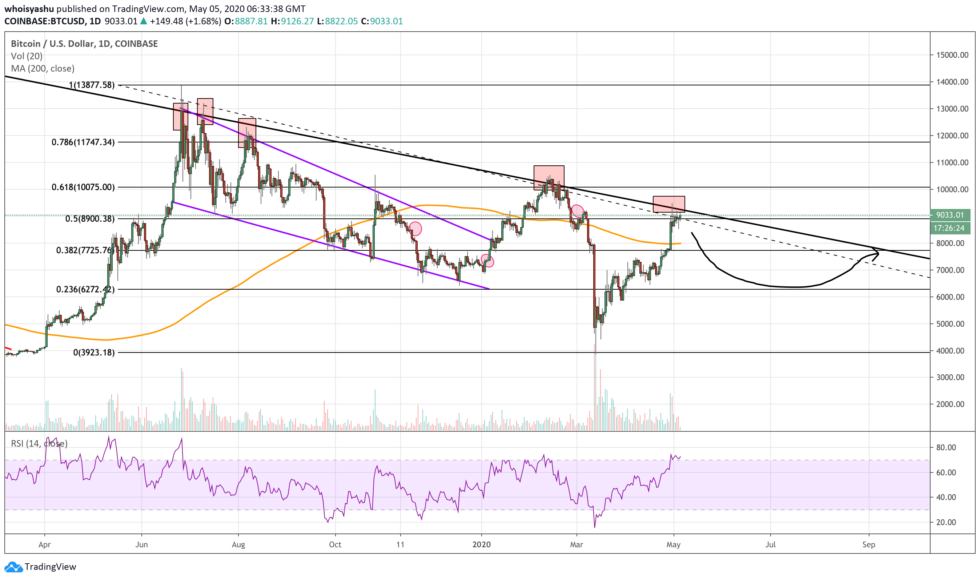 But then, Bitcoin is struggling to maintain its climb above $9,000 repeatedly. That has led many to predict a short-term price correction which, again, goes against the optimistic futures market.

The technicals show that bitcoin’s next pullback from $9,000 or above could have it test $7,725 as interim support. An extended downside momentum would shift the bearish target towards $6,300. Meanwhile, the long-term outlook envisions bitcoin at least above $15,000 by the end of 2020, given it breaks above its giant Descending trendline (blacked).