According to data from Skew Analytics, the swift 5.35% drop resulted in $90 million worth of liquidated leveraged positions at BitMex.

In the immediate aftermath of Bitcoin’s sharp price correction crypto-Twitter began to speculate that Bitcoin whales were at play. Some traders pointed to a well-known Bitcoin whale called Joe007 as one of the players partially responsible for Saturday’s correction. 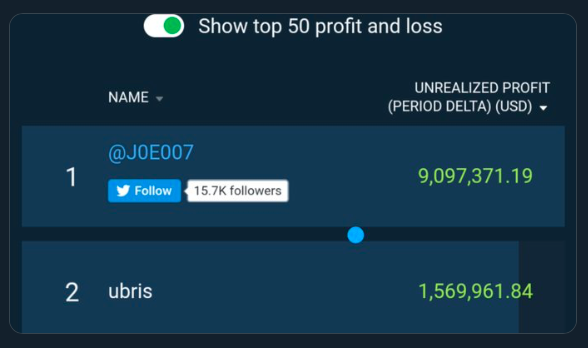 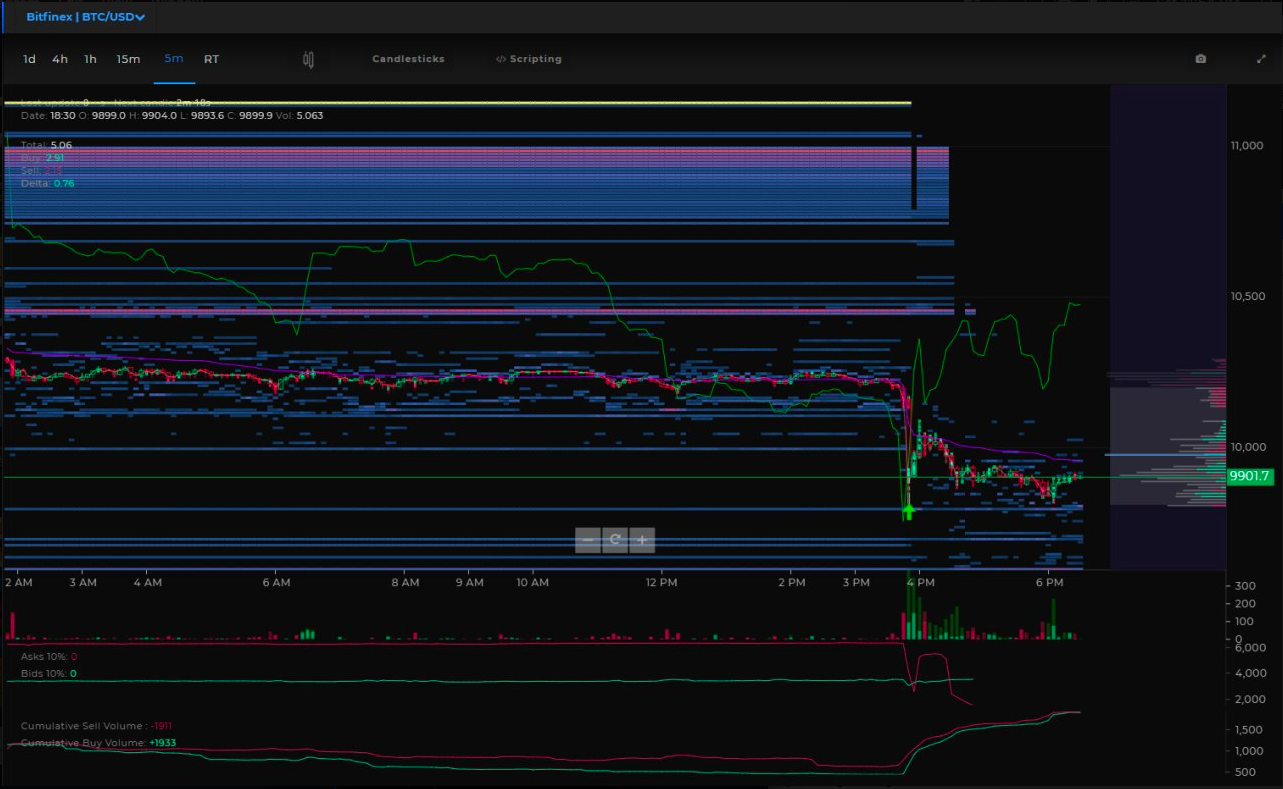 Popular crypto-trader and Cointelegraph contributor filbfilb also posted the above chart to his Telegram group and pointed out that as a sell-wall was removed Bitcoin’s price dropped. Filbfilb suggested that Joe007 took advantage of thin order books the weekend in order to slam Bitcoin’s price below $10,000.

This wouldn’t be the first time a crypto whale was implicated in trading maneuvers that significantly impacted the entire spot market. In December 2018, Joe007 entered into a bet with a Dogecoin advocate to win 10,000 DOGE and then seemingly used an 800 BTC buy-wall to defend the $7,200 level.

What’s next for Bitcoin?

Now that the smoke has cleared and the price appears to have stabilized we can take a look at the charts to see what or where Bitcoin price might go next. The drop below $9,900 nudged the price out of the rising wedge pattern and to the lower band of the Bollinger Band indicator. 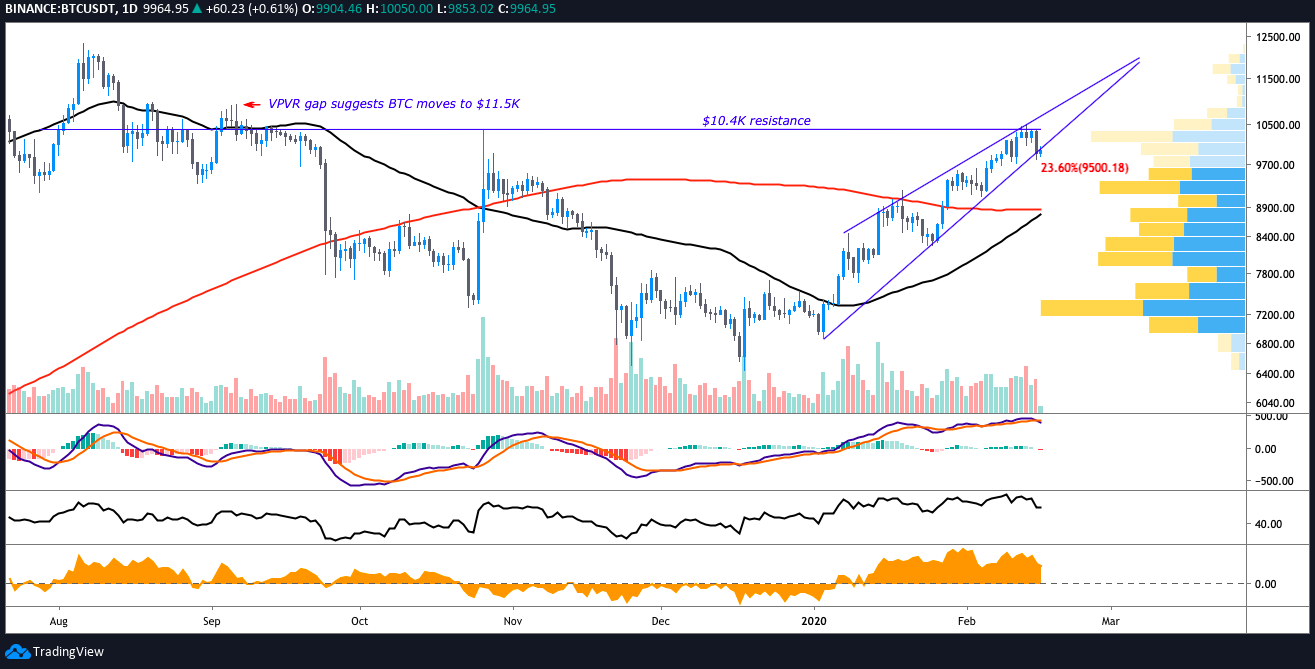 Taking a closer look at the daily and 6-hour timeframe shows that $9,800 has served as support and the Volume Profile Visible Range, or VPVR, shows a high volume node between $9,898 to $9,756. Below this level, there is also support at $9,400 which is near the 23.6% Fibonacci Retracement level.

In the event that $9,400 fails to provide support, Bitcoin’s price could drop to the 50-day moving average at $8,800. Despite the somewhat dire outlook presented above, traders need not sell at market rate and run for the hills.

After an amazing multi-week rally which saw Bitcoin price move from $6,853 to $10,497, many traders already believed that the digital asset was overdue for a correction. 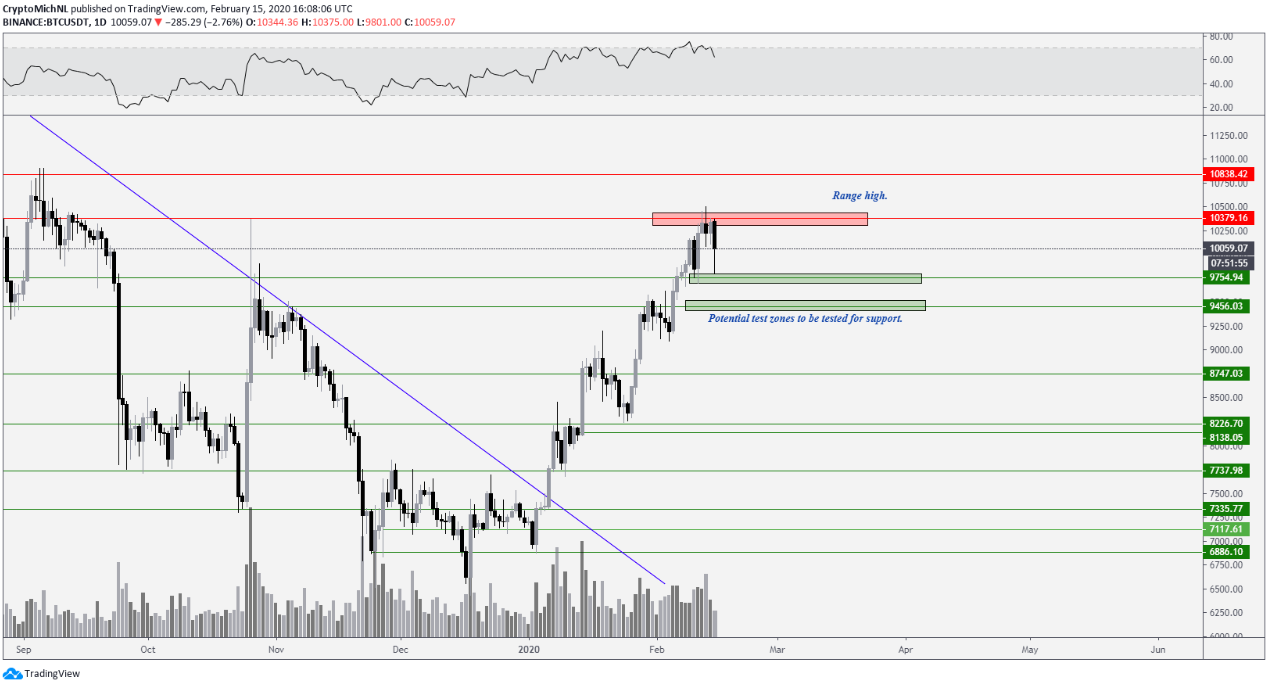 Take, for example, crypto trader and Cointelegraph contributor Micheal Van de Poppe who on Saturday tweeted the above chart and said:

“Uptrending markets give you only a few retracements and usually they are bought up quite quick. This is a nice drop and instant to the first interest zone. Alts holding up really well in $BTC pair. Calm pace -> everything continues.”

As the weekly close approaches, traders will want to see Bitcoin reclaim and hold $10,000 and fingers will be crossed that the $10.1-$10.3K area has not flipped from support to resistance.

At the time of writing the 6-hour timeframe shows Bitcoin riding along the 50-MA, making higher lows and attempting to push above the lower trendline of the rising wedge. 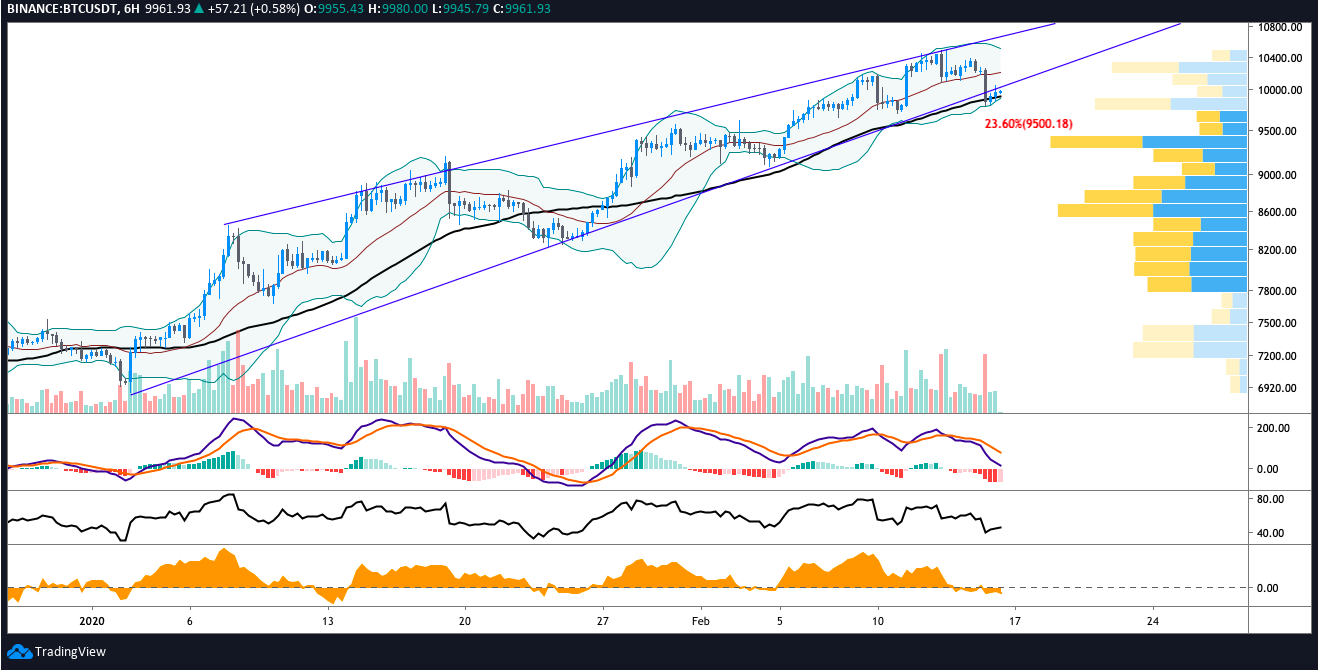 The Relative Strength Index, or RSI, has already pulled up to reverse course from it slow at 39. An encouraging development would be to see Bitcoin tackle $10K then push to the Bollinger Band moving average at $9,200.

If the price can sustain above this moving average this would give the bulls an opportunity to aim for the upper Bollinger Band arm at $10,516.

Bitcoin wasn’t the only asset to undergo a sharp correction on Feb.15. As the digital asset dropped to $9,800, a large number of altcoins also saw double-digit percentage losses.