The cryptocurrency market shows no signs of slowing down so far in 2020. After charting one of the most impressive performances in January, Bitcoin continues its rally in the first week of February as well. In the past seven days, the cryptocurrency increased by about 5.5%, claiming essential resistance levels on the way up. Currently trading at around $9,800, all eyes are on the critical psychological barrier of $10,000.

Bitcoin’s price was rangebound in the first few days of the week, and it dipped to as low as $9120 on Tuesday, February 4th. From there, however, it was all uphill. The cryptocurrency charted a high of around $9,900 and retraced a bit to $9,800. The market sentiment is particularly bullish as $10,000 seems in sight.

It’s not just Bitcoin, though. Altcoins are surging as well. Bitcoin’s dominance has decreased down to 63.9%, which means that other cryptocurrencies manage to claim serious grounds.

As seen in the above picture, not only are altcoins in the red, but almost all of them are marking double-digit increases in the past seven days. Ethereum has had an impressive performance, surging upwards of 23%, while XRP follows closely with 17%. An interesting survey revealed that 50% of cryptocurrency traders hold mainly altcoins over Bitcoin at this time.

In a broader view, the trend of government-backed cryptocurrencies continues. Federal Governor Lael Brainard recently said that the US is looking closely at launching its own. Japan is also reported to move forward with its plans to avoid falling behind China.

In any case, it remains exciting to see how the market will perform in the following months and whether the bullish trend of 2020 will continue. 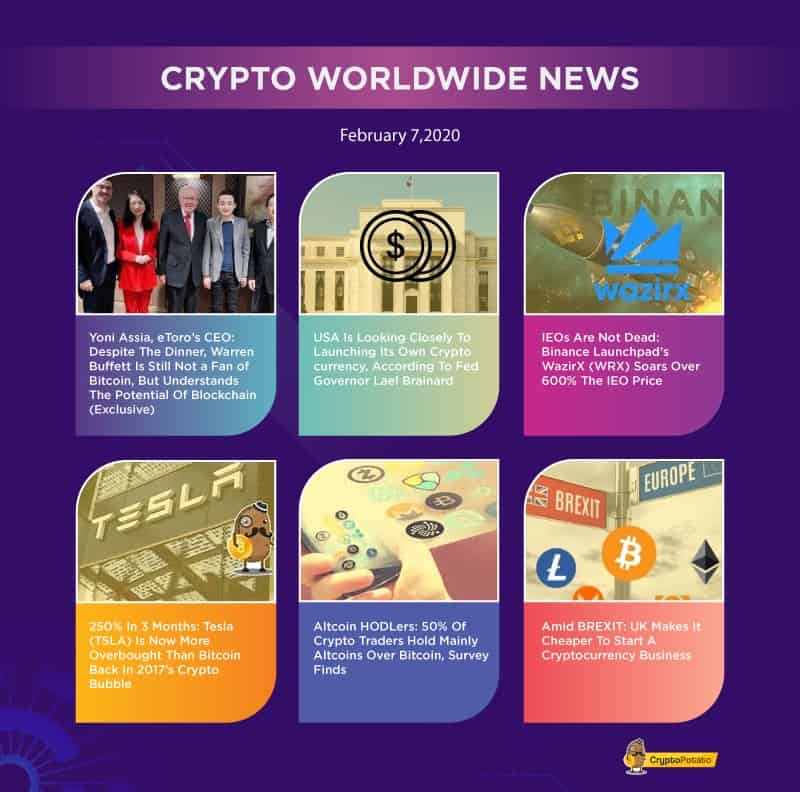 Yoni Assia, eToro’s CEO: Despite The Dinner, Warren Buffett Is Still Not a Fan of Bitcoin, But Understands The Potential Of Blockchain (Exclusive). One of the most anticipated events in the cryptocurrency community finally took place this month. Justin Sun, along with other prominent figures in the field, had dinner with the well-known traditional investor Warren Buffett. Yoni Assia, eToro’s CEO, who was also present, revealed that his stance on Bitcoin hasn’t changed much.

The USA Is Looking Closely To Launching Its Own Cryptocurrency, According To Fed Governor Lael Brainard. According to Governor Brainard, the US Federal Reserve is already experimenting with blockchain-based technology to identify potential use cases for a central bank digital currency (CBDC). However, the institution is also cautious of its risks and wants to address them beforehand.

IEOs Are Not Dead: Binance Launchpad’s WazirX (WRX) Soars Over 600% The IEO Price. While IEOs were considered pretty much dead, the latest one held on Binance Launchpad proved that sentiment wrong. WazirX surged over 600% from its IEO price, bringing investors returns that weren’t seen in the past few sales.

Altcoin HODLers: 50% Of Crypto Traders Hold Mainly Altcoins Over Bitcoin, Survey Finds. According to a recent survey, over 50% of traders hold mainly altcoins at this point, rather than Bitcoin. This is a further proof that 2020 might have given birth to a serious altcoin season, especially given the declining Bitcoin Dominance.

Amid BREXIT: UK Makes It Cheaper To Start A Cryptocurrency Business. On January 31st, the UK officially left the European Union. Despite the country being in a transition period until the end of the year, it has already started altering specific regulations. It has made it cheaper for people to start cryptocurrency-related businesses, lowering the registration thresholds substantially.

This week we have a chart analysis of Bitcoin, Ethereum, Ripple, TRON, and Chainlink – click here for the full price analysis.