The last week of trading has undoubtedly been a successful one for Bitcoin and the entire cryptocurrency market. BTC’s price gained more than $1,100, charting an increase upwards of 13% in the past seven days alone. Despite the few ups and downs, the price seems to be comfortable above $9,400.

Interestingly enough, Bitcoin is trading well above the 200-days moving average. According to recent research by Tom Lee’s Fundstrat Global Advisors, in 80% of all situations when BTC was above the 200MA, it delivered returns of about 193% within the following six months.

On another note, Bitcoin is trading on par with Gold amid the recent outbreak of a new coronavirus in China. The epidemic has seen many people die, while even more getting infected. The situation is so serious that the country has had to lock down numerous cities to prevent the further spread of the virus. Asian stocks took a hit, and, naturally, as China is the second-biggest economy by GDP, this had a toll on global markets as well. However, Bitcoin and Gold charted gains during this time, causing many to believe that investors are using them as a hedge against the distressed economies.

Bitcoin’s dominance has increased slightly during the past week, and it currently sits at 66.3%. A lot of altcoins saw seriously positive spikes in their price as well. Ethereum is up more than 10%, Bitcoin Cash is up 21%, EOS is up 20%, and so forth.

It’s also worth mentioning that the regulatory landscape around cryptocurrencies is also on a positive track. The World Economic Forum announced a new consortium that would aim to create a legislative framework for digital currencies and stablecoins. This falls in line with what Bakkt’s president, Adam White, had to say on the matter. According to him, the days of unregulated Bitcoin derivative exchanges might soon be over.

In any case, January ends with Bitcoin up more than 35%. With a little over 100 days until the halving, it’s interesting to see where the price would go from here. 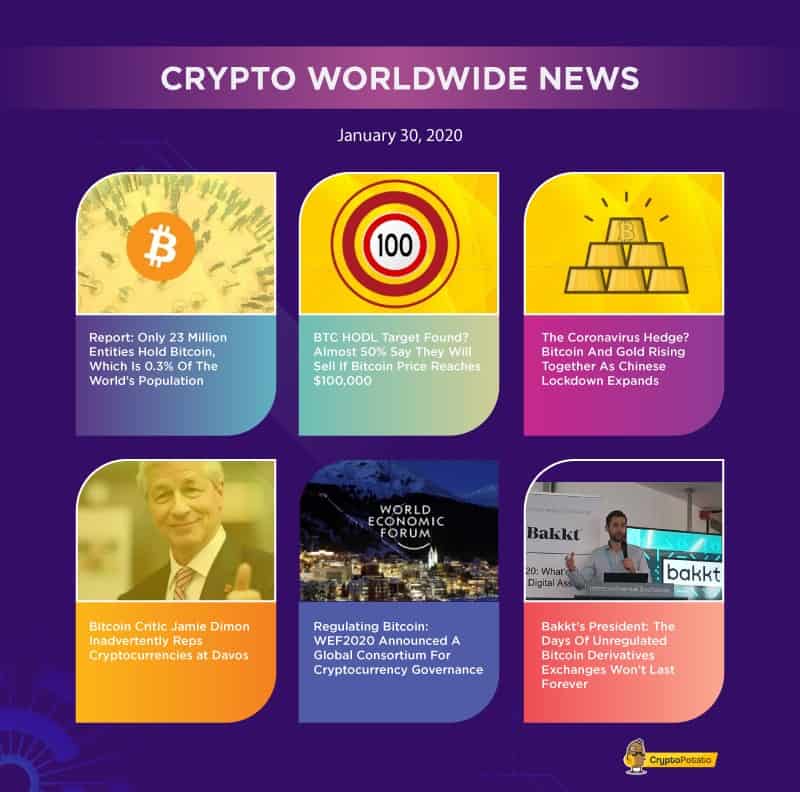 Report: Only 23 Million Entities Hold Bitcoin, Which Is 0.3% Of The World’s Population. A recent report has revealed that only about 23 million entities hold Bitcoin. While the number might sound a lot at first, it represents a tiny 0.3% of the world’s population. This signals that there is a lot more room for further adoption.

BTC HODL Target Found? Almost 50% Say They Will Sell If Bitcoin Price Reaches $100,000. A Twitter poll aimed to find out when would Bitcoin holders sell their bags. Interestingly enough, the majority of people said that they would do so if Bitcoin’s price reaches $100,000. Yet, a lot of users also pointed out that they wouldn’t sell, even at these high prices.

The Coronavirus Hedge? Bitcoin And Gold Rising Together As Chinese Lockdown Expands. China is torn by a recent outbreak of a new coronavirus, which saw a lot of people die and even more been infected. This took a toll on the country’s economy, while global financial markets also responded negatively. However, Bitcoin and Gold emerged as a potential hedge as their prices kept increasing.

Regulating Bitcoin: WEF2020 Announced A Global Consortium For Cryptocurrency Governance. One of the major financial gatherings in the world took place in Davos this year. At the end of the World Economic Forum, they announced the first global consortium focused on designing a framework for the governance of digital currencies, including stablecoins.

This week we have a chart analysis of Bitcoin, Ethereum, Ripple, Monero, and IOTA – click here for the full price analysis.