Bitcoin has made another sustained move higher today tapping a high not seen for almost three months. From here there is a very short ride to $10,000 again but will it get there this week?

For the fourth day this week bitcoin has added further gains. This latest move, which began a few hours ago during Asian trading, propelled prices to highs not seen since early November. 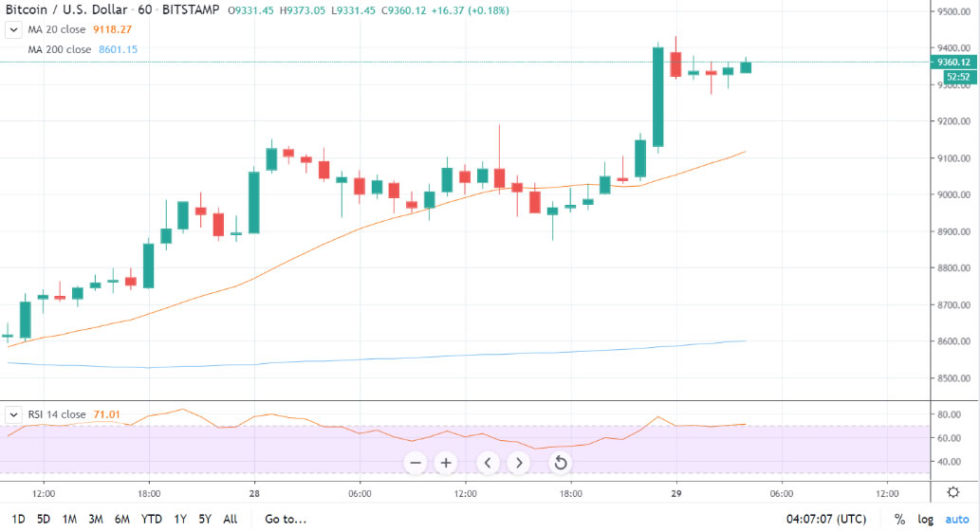 From here it is just a mere $600 to five figures which could happen this week if momentum continues. Bitcoin has not had a sustained month of solid gains since April last year when it shot from $4k to $5.5k.

So far this month the asset has made almost 30% making it one of the best performing Januarys in its short history.

Analyst and trader Josh Rager has commented on the correction calls that are still floating around the crypto twitterverse. He observed that the downtrend has been clearly broken and a close above $9,557 on the weekly time frame will confirm another higher high.

How long you bears going to stay bearish?

The downtrend is clearly broken on high time frame and if Bitcoin closes above $9557, that’s a higher-high

Sure, BTC could pullback but stop with the $5k calls until price breaks at least below $8k (if it even gets there again) pic.twitter.com/MHLuSQih6M

The bearishness has come from Open Interest on BitMEX which is closing in on $1 billion. In previous instances there has always been a pullback at this level.

Open interest on #bitcoin is currently at $943 million.

Let’s see if this time will be different.

Whether there is a pullback or not, bitcoin performance so far this year has been phenomenal. The safe haven narrative has strengthened, clearly observed with the two major incidents that have occurred in January.

Fundstrat’s Tom Lee has been comparing returns for bitcoin and gold and Peter Schiff has been notably quiet on the subject.

– Gold is up a decent 3% vs a whopping 26% for Bitcoin pic.twitter.com/GWKEfYGcut

Geopolitical tensions, economic adversity, and viral outbreaks in an overpopulated planet that is running short on food will continue.

There will always be a need for safe haven assets and the younger generations are likely to turn to something digital such as bitcoin.

The FOMO is likely to continue, especially if BTC does hit $10k within the next week or so. The halving is now only 104 days away and that is likely to add to the momentum.

Will BTC top $10k this week? Add your comments below.