Bitcoin (BTC) investors have already made more on their holdings this quarter than any Q1 since 2014, as data shows a sustained influx of institutional interest.

According to findings from statistics resource Skew Markets, Bitcoin’s gains so far in 2020 amount to just under 30%. In no other quarter in the past six years did markets perform that strongly.

The impressive stats come amid renewed faith in Bitcoin’s long-term potential. As Cointelegraph reported, Bitcoin futures data suggests institutions truly are engaging with the cryptocurrency on a new level as more products hit the market.

Aggregate open interest across futures products is now higher than ever, with Skew recording a total of around $3.7 billion as of Jan. 28. Volume across Bitcoin markets is also on the increase.

“Volume tells all,” trader Scott Melker summarized as he hailed encouraging progress for BTC price versus volume in 2020.

That higher price is also subject to speculation from commentators. In an analysis on Tuesday, trader Tone Vays demanded the $9,000 level hold for at least several days before he considers a bull market in effect.

Another indicator, the Bitcoin Fear & Greed Index, which charts Bitcoin’s likely price trajectory based on investor sentiment, is flashing bearish.

Currently, with a score of 57, the metric is slanted towards suggesting the market is “due for a correction.” 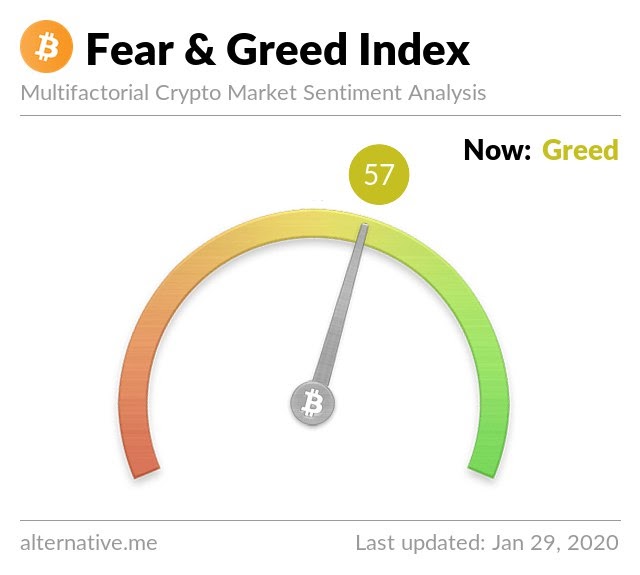 How much the potential losses would total meanwhile remains a subject of speculation in itself. Bitcoin’s January performance has already turned some analysts decidedly bullish, with several recently telling Cointelegraph that previous lows of $6,000 would not return.

“200 dma found the support. Next level is the old resistance at $9,555 daily close above there and things could escalate,” he told subscribers of his Telegram trading channel on Tuesday.