Bitcoin Price Ready to Push Above Key Resistance to Hit $10,000

Bitcoin Price Ready to Push Above Key Resistance to Hit $10,000


Bitcoin (BTC) price sees a tremendous start of the year as it surged 25% year-to-date. Not only has Bitcoin been flourishing over the past few weeks, but altcoins have also been following along. Will Bitcoin continue the upward momentum, or is it a temporary top close?

The price of Bitcoin broke through the downtrend a few weeks ago, which marked the possible end of the downwards pressure. The slight test of $7,600 confirmed this breakout, after which price continued to rally towards $9,000.

The price of Bitcoin broke above $8,200 and rallied towards $9,000. This level is currently providing a barrier to go through and is the next resistance. 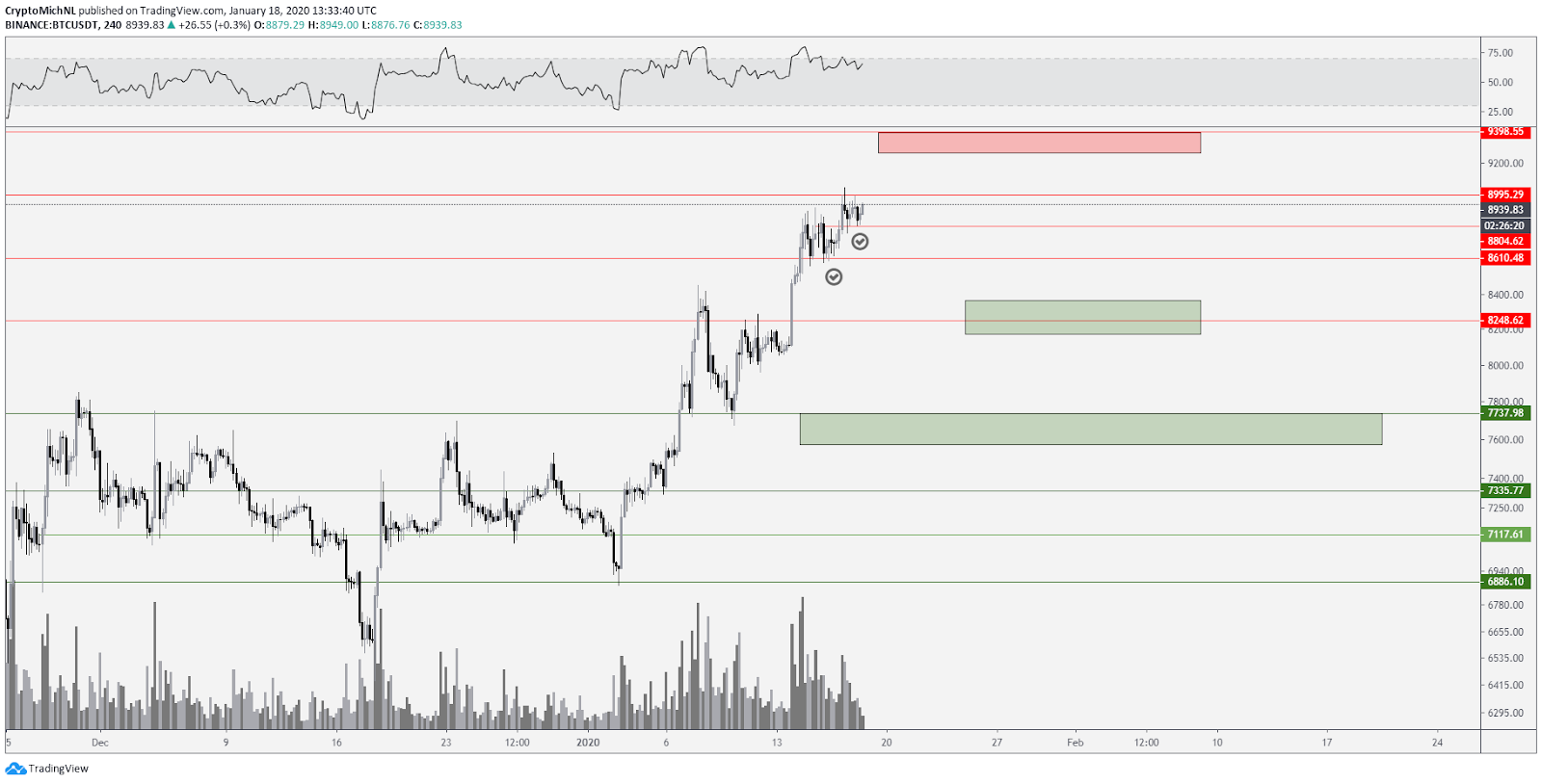 The 4-hour chart is showing a similar move upwards. Remarkably, the $8,600 level instantly flipped to become support in the past few days, after which the price of Bitcoin continued to rally towards $9,000.

But, $8,800 is currently holding, and the price has been moving in a tight range between $8,800 and $9,000. Thus, a breakout in the coming days looks likely. The question remains to which side this breakout will happen and what are the targets?

The total market capitalization has also broken the downtrend upwards and is currently hovering around $248 billion. 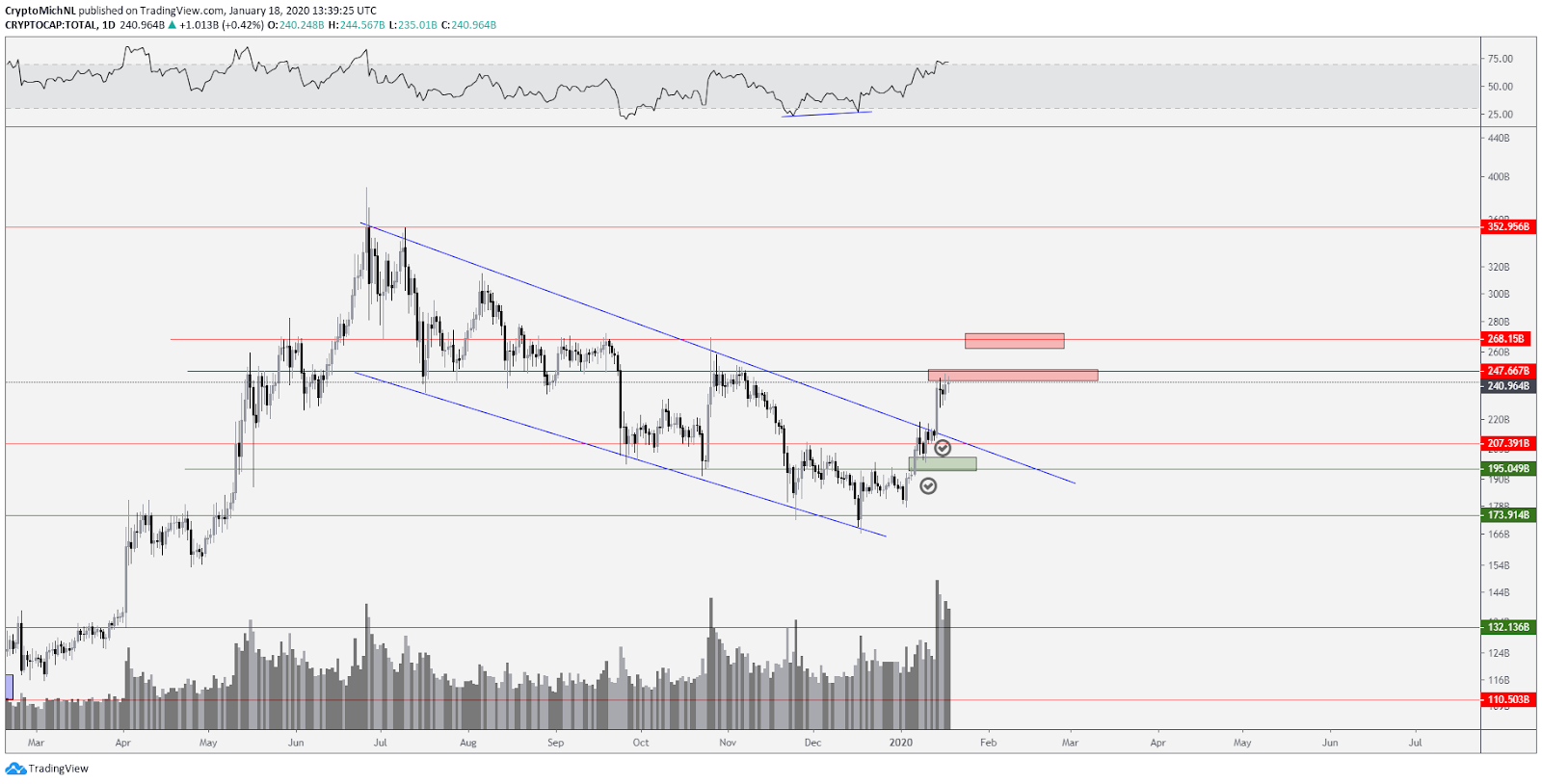 As the recent article showed, the next resistance is at $247-248 billion. The green zone at $195 billion became support, after which price continued to rally. A similar flip occurred at $207 billion, which led to the breakout of the downtrend.

The next resistance shows at $247-248 billion (our current price level) as that level supported during the summer period of 2019. This level should typically be where traders who are anticipating a breakdown to short or sell their positions. Breaking through this level would put the next targets at $268 and $350 billion. 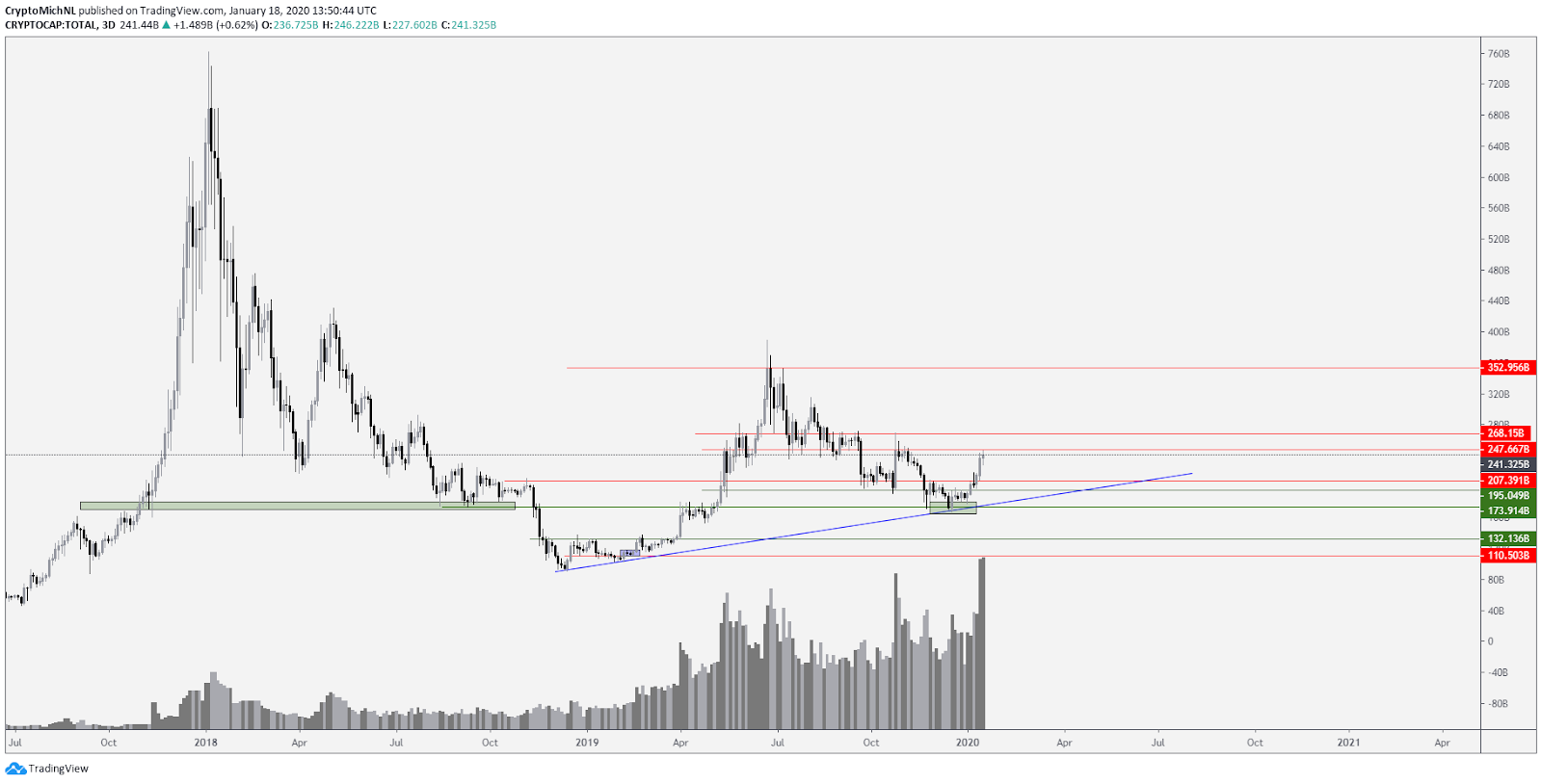 Aside from that, the $173 billion levels showed support and marked a bottom, after which the market capitalization rallied to the next resistance of $250 billion as discussed above. A breakthrough would generally lead to the continuation of this trend towards $350 billion. 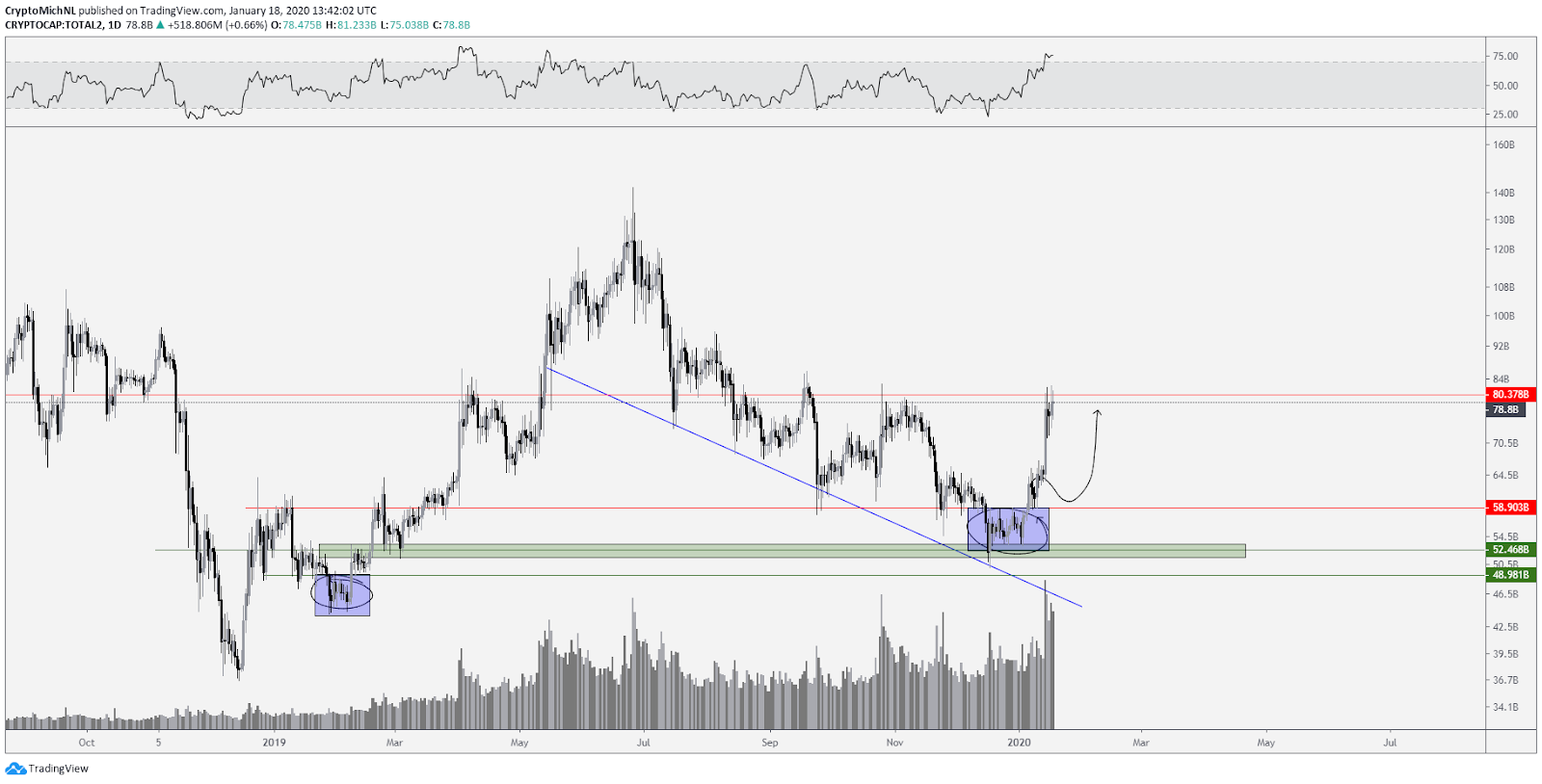 If the altcoin market capitalization breaks through this zone, the next targets are found at $92 billion and $130 billion, which would mean that this market cap is at the same level as it was during the summer of 2019.

Bitcoin Dominance on the edge of breaking down 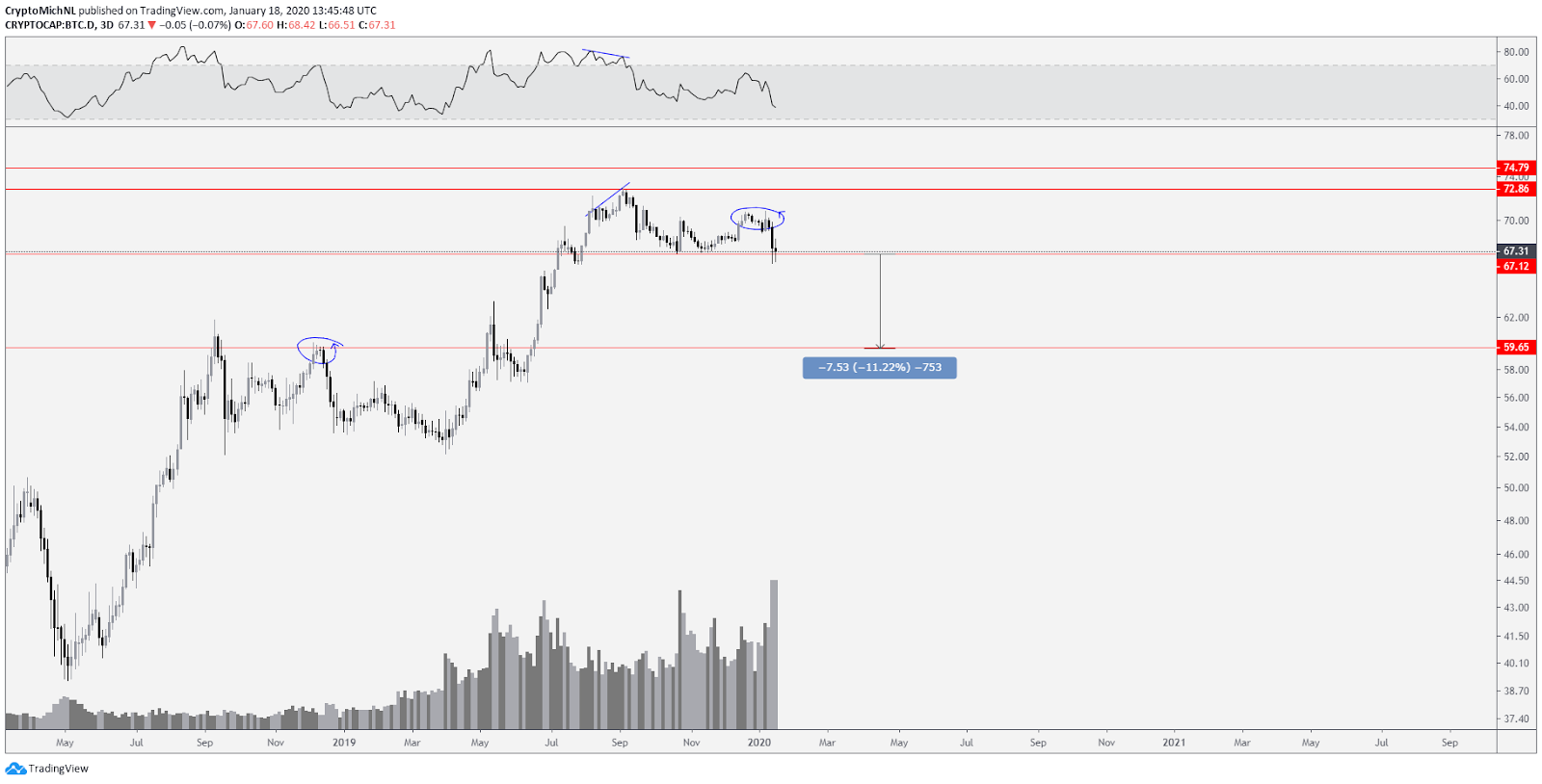 The chart of the Bitcoin dominance is showing signs of a potential breakdown. If the dominance of Bitcoin drops below 67%, a continuation of that drop towards 60% is likely to occur. Such a dropdown would lead altcoins to outperform Bitcoin.

The top of the Bitcoin dominance chart is displaying bearish divergences, which usually means a trend reversal. Similar signs were shown at the top in September 2018.

The bullish scenario for Bitcoin

The momentum is currently upwards, so the bullish scenario is likely. Based on the recent price movements, holding $8,800 is essential for continuation towards the upside.

Overall, Bitcoin started to rally since $6,400, so the upwards continuation will be stopped at some point to consolidate. That’s the main thing I’m expecting in the coming weeks from Bitcoin. If Bitcoin breaks upwards again, it’s most likely to start ranging between $9,000-$10,000 for some time in preparation for the next push upwards.

Where do we establish that range? At this point, it’s not certain as we don’t have full confirmation of any short-term trend reversal, and the price is still looking to push upwards. If the price of Bitcoin breaks through $10,000, then FOMO (fear of missing out) could come back into the market, triggering the price to go towards $11,600.

The bearish scenario for Bitcoin

As stated previously, bearish scenarios are only bearish scenarios for short-term purposes, where the price generally needs to establish a range. Usually, bouncing from a new support level would lead towards a continuation in the trend, which has been upwards over the past weeks.

A similar perspective is given if $9,400 doesn’t break upwards (through which Bitcoin makes a blow-off top). Targets for the retracement would then still be $8,250 and $7,600 as the main support zones.

The views and opinions expressed here are solely those of the author and do not necessarily reflect the views of Cointelegraph. Every investment and trading move involves risk. You should conduct your own research when making a decision.