Ethereum went through a network update that delays the difficulty bomb. Although the mining difficulty will remain the same, different technical analysts are starting to turn bullish on ETH.

On Jan. 2, at Block number 9,200,000, the Muir Glacier hard fork was completed on the Ethereum blockchain. The network update was activated with only one improvement proposal, EIP 2384. The upgrade was designed to push back the difficulty bomb, a built-in algorithm that aims to increase the difficulty in mining a new block, for another 4,000,000 blocks, or approximately 611 days.

Thus far, 93 percent of all clients are ready and synced, but there are a few that are still having issues, including teth, multigeth, and aleth, according to ethernodes.

This is the third time that the Ethereum Foundation decides to postpone the difficulty bomb. The first time took place in 2018 with the Byzantium hard fork. The second one occurred in February 2019 as part of Constantinople. Now, Tim Beiko, a product manager working at the Foundation, explained that the latest delay comes after the team realized that the timing predicted for the difficulty bomb to take place in mid-2020 was wrong.

With the newest pushback, Ethereum developers will have more time to find a long-term solution to the difficulty bomb, which has been criticized by many in the community. Micah Zoltu, for instance, maintains that the bomb should not be kept as it is. Instead, the software engineer suggests that it should be cut out entirely or made more predictable.

As Ethereum prepares to launch ETH 2.0 into mainnet, some of the most prominent technical analysts in the industry believe that this cryptocurrency could be preparing to resume its uptrend.

In a recent tweet, Derick Fiebiger, the founder of Arturo Capital, said that Ethereum usually starts trending up every January based on historical data. Although the reasoning behind the upswing is unknown to Fiebiger, he claims that this time around a similar phenomenon could take place. 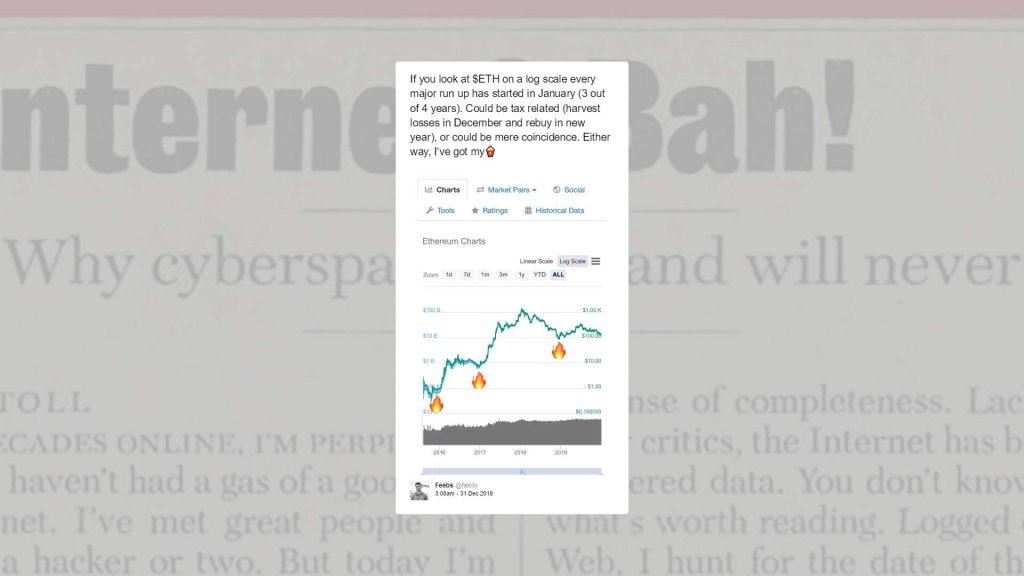 Along the same lines, Michael van de Poppe, a full-time cryptocurrency trader, argues that the trading pair ETH/BTC is showing different bullish signs. He affirmed that Ethereum could be constructing a bottom. The analyst expects ETH to make a higher low before it finally breaks out to the upside. Such a bullish impulse could come the first quarter of the present year, as van de Poppe stated. 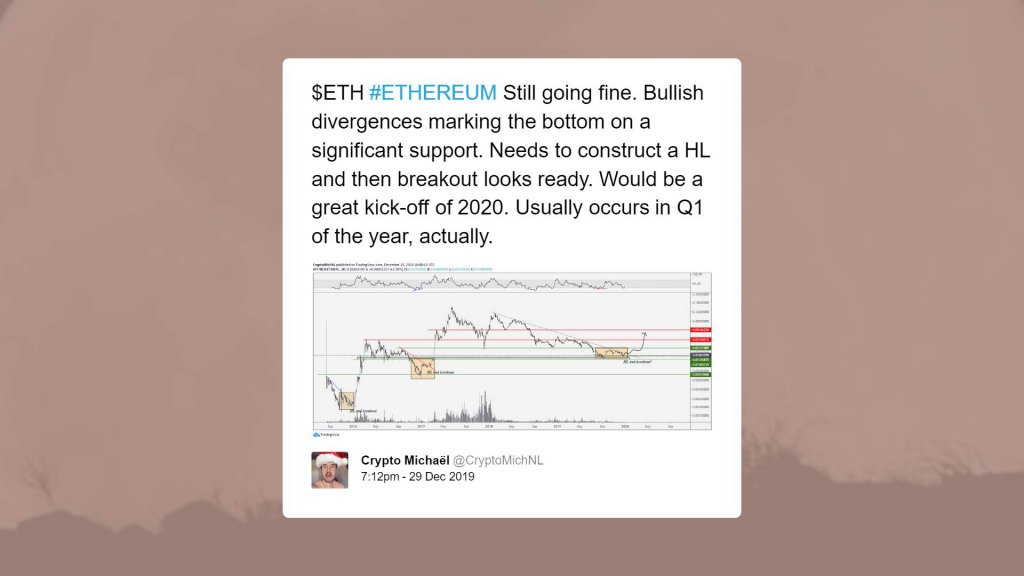 Despite the optimism, Ethereum is still on a red seven candlestick, based on the TD sequential indicator. This technical index estimates that ETH could continue its bearish trend for another two weeks before a bullish signal is given in the form of a red nine.

Now, it remains to be seen if history will repeat itself and Ethereum will rise this month like it did in the last few years. The launch of Serenity, ETH’s long-awaited scaling upgrade, could give this cryptocurrency the boost that it needs. This hard fork is scheduled to happen sometime in Q1 2020.