As the crypto community enters 2020, the CEO of the ZenGo wallet Ouriel Ohayon tweeted his new year predictions, one of which was that the price of Bitcoin will crash below $1,000.

Ohayon tweeted 9 hours ago to press, “Bitcoin will crash to sub-1000 USD.”

Along with his Bitcoin price prediction, Ohayon shared:

“All hardware wallets will be hacked; Tron/XRP will become the most important cryptocurrency; Satoshi identity will be revealed and will be disappointing; Trump will stack sats on twitter; Lightning will have glorious adoption.”

Was Ohayon being serious?

While it may have initially seemed like Ohayon’s tweet was filled with sarcasm, he clarified his sentiments with another tweet shortly afterwards, saying “joke mode off.”

When asked if he truly believed if these predictions would come true this year, Ohayon told Cointelegraph in another tweet, “I am a disaster at making predictions. Did you notice the thread?”

A few minutes later, Ohayon admitted that his predictions were not serious, but that he was happy to get them out. 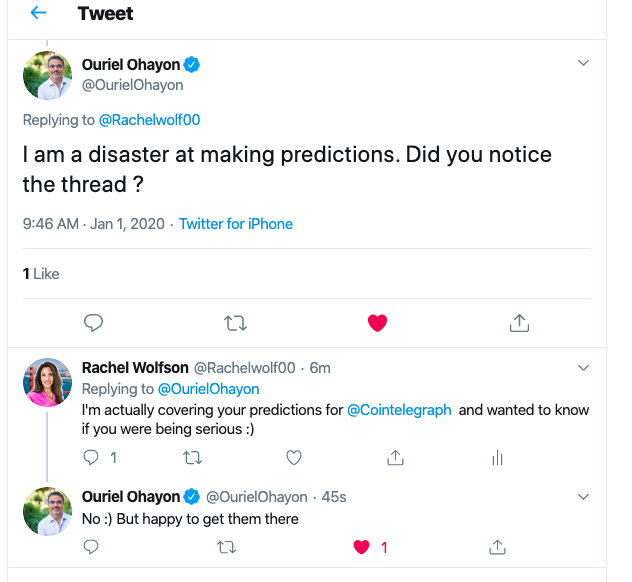 A hint of truth in every joke

While Ohayon’s predictions were more or less a joke, they might bear some real-world weight.

For instance, Australian entrepreneur Craig Wright made the claim in 2019 that he is Satoshi Nakomoto, sparking instant controversy in the crypto space. Ironically, Wright also informed court officials that he could not finance a 500,000 BTC settlement in the case that the Kleiman estate initiated against him in November. Dave Kleiman was a cyber-security expert, whom many believe to have been one of the first developers behind Bitcoin and blockchain technology.

While it may be extreme to predict that every hardware wallet will be hacked this year, a number of vulnerabilities in hardware wallets have recently come to the surface. A Kraken Security Labs’ blog published on Dec. 10 details a “voltage glitching” attack that extracts the encrypted seed used to access cryptocurrency stored on a KeepKey hardware wallet. An attacker can then brute-force attack the encrypted seed, as it is only protected by a 1-9 digit PIN, which Kraken described as “trivial.”

Although it does seem likely that 2020 will be met with more Satoshi Nakomoto identity claims and wallet hacks, one of Ohayon’s predictions does seem a bit farfetched. While it would be a major win for the crypto community to have President Trump tweet about buying Bitcoin, it seems highly unlikely this will happen anytime soon based on a tweet the president sent out on July 11: 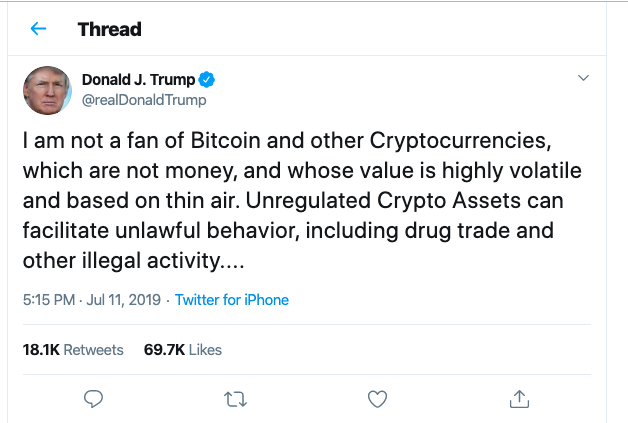