The Financial System of the Future — Who Benefits From CBDCs?

The Financial System of the Future — Who Benefits From CBDCs?


In recent months, the race for the development of a central bank digital currency is gaining pace. The last signal was launched by Chinese President Xi Jinping, who publicly stated the need to invest public resources in blockchain, slated to be the core technology of the future. The euphoria of the Chinese market following the presidential declaration induced Mark Zuckerberg — who had been encountering considerable resistance from Western authorities since the beginning of the Libra project — to raise the alarm on an alleged Chinese overtaking of digital currency technology.

A CBDC is a new type of legal tender which will expand the public’s digital access to central bank accounts, which is limited to commercial banks today. As a result, this tool will combine the digital nature of bank deposits with the classic advantages of cash in daily transactions. A key point to carefully consider, though, is, To what extent is this the case? Would the new currency take the form of a personal account at the central bank that can pay positive interest rates, or that of an anonymous digital token without interest, like classic cryptocurrencies?

Recent research by the International Monetary Fund has explored the optimal monetary and technological features that a newly minted CBDC should have, depending on the economy and the banking system in which it might circulate. Indeed, sudden changes in the use of payment instruments can become particularly disruptive and produce highly undesirable side effects throughout the economy. Consequently, following a “successful” introduction of a digital currency, other existing payment instruments may disappear if their use falls below a critical threshold. For example, with the declining use of cash, banks can reduce the number of ATMs and businesses can refuse to accept cash — a process currently in an advanced stage of development in Sweden.

Generally speaking, economic operators have different preferences for anonymity and payment security. Cash almost always guarantees an anonymous transaction, while bank deposits satisfy the need for security. Anonymity has its value and doesn’t always need to be approached with suspicion despite its indisputable link with tax evasion.

Recently, even the president of the European Central Bank, Christine Lagarde, said that there is an irrepressible demand for non-traceable payments tools, which can be of help in protecting consumers from unauthorized use of personal transaction data for credit score assessments, among other forms of fraud.

A digital currency can satisfy any combination of anonymity and security, depending on its design. For example, a central bank could guarantee only partial anonymity toward other users but not toward authorities, depending on relevant events such as a court order or even the setting of transaction limits.

A CBDC can only approach the non-traceability aspect of cash if it takes the form of a token, such as a standard cryptocurrency accessible from an unverified user account, or through an anonymous payment card purchasable in stores or online. These forms of CBDC would obviously suffer from the same risks of loss and theft associated with cash and crypto: physical (card loss) or digital (keys loss).

Assuming a different design, an account with the central bank for each citizen validated with an ID card would replicate (and overperform) the security and traceability of a bank deposit.

A digital currency could disrupt the financial system to the extent it displaces the demand for cash or deposits. The subsequent problem is not only the possible disappearance of cash — a CBDC design similar to a bank deposit would force banks to raise deposit rates simply to remain competitive. This would be reflected in higher interest rates on loans, and hence would trigger an involuntary contraction of credit to businesses. Depending on an economy’s (more or less intense) dependence on bank credit, this decline in bank intermediation could reduce investments, production and employment, even if families would benefit from higher interest rates on deposits.

The banks’ disintermediation could be exacerbated if the digital currency is released bearing an interest rate, a triviality in the CBDC’s design. However, the interest rate could be not only positive (as on a deposit account) but also negative, in which case, the value of the digital cash would be eroded at a much faster rate than the official inflation rate, perhaps to prevent hoarding and encourage consumer spending.

The massive build-up in recent months suggests that central banks are working on CBDCs that do not pay interest like cash, in order to protect the banking system from potentially devastating consequences. This policy choice will put cash as the major competitor to digital currencies. However, against the conventional wisdom that favors a cashless society, the elimination of cash has tangible costs, especially in developing economies, even if they are less visible than the disintermediation of the banking system.

Recent data shows that there is still a formidable global digital divide in access to payment instruments.

Half of the world’s financially excluded population live in South Asia, East Asia and the Pacific, with 12% of China’s population unbanked, and 21% of India’s and 6% of Indonesia’s unbanked. Together, these countries represent 40% of the global population. According to the World Bank Global Findex 2017 database, people living in the Middle Eastern and North African regions are the least served by standard financial institutions. The current account penetration in this region is just 14%. Denmark tops the World Bank rankings at 100%.

The requirements for obtaining a bank account — possession of money, a form of government-issued ID, and proof of residence — are a luxury for the marginalized in the developing world. From the same report of the World Bank, 1.5 billion people, mostly residing in Africa and Asia, do not have any form of ID. Other reasons for exclusion include a lack of financial literacy and living in an underserved rural area. Additionally, over 200 million micro, small and medium-sized businesses lack access to basic bank accounts and adequate funding. 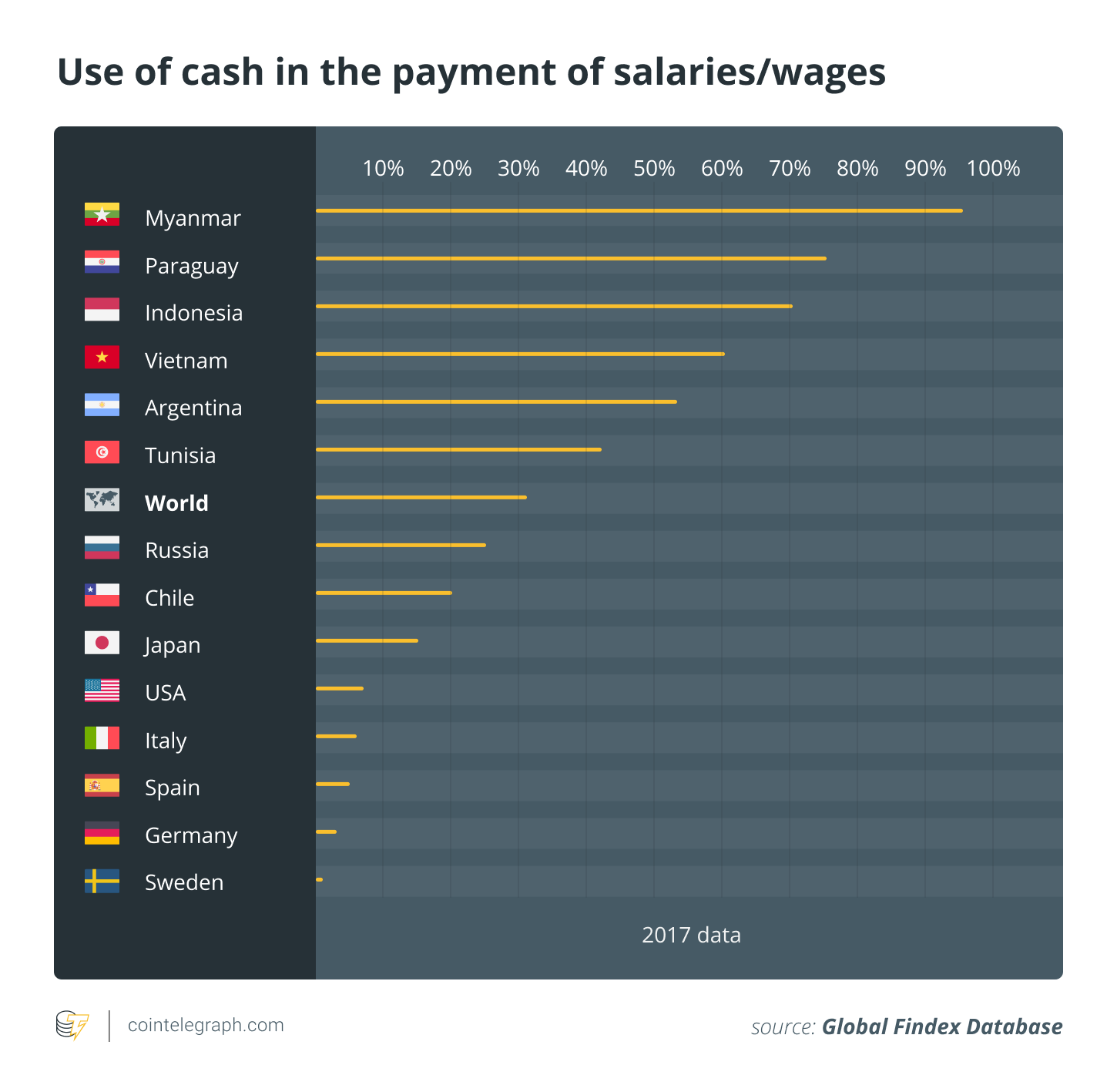 In India, where the government has been attempting to enforce the development of banking intermediation, the value of banknotes and coins in circulation has still grown at an annual rate of 14% between 2006 and 2015.

In fact, when a digital currency is introduced in the International Monetary Fund’s simulations, low-income families tend to remain cash users for much longer. Since cash — unlike bank deposits — does not pay interest, these families would bear a disproportionately greater loss than wealthier deposit holders if loans decline due to the negative repercussions of a CBDC on the economy.

Furthermore, if the digital currency sends cash out of circulation, as is already happening in Sweden, these families would suffer from a further decline in welfare due to the loss of their preferred method of payment.

Hence, from the IMF simulations, depositors emerge as the main beneficiaries and cash users as the main “losers.” This implies a potentially regressive impact on income distribution that central banks and governments must carefully evaluate.

Bank deposits with advanced features such as instantaneous money transfers and new digital currencies have the potential to increase savings, consumption and investments, thereby guaranteeing innovation, job creation and boosted economic stimulation. They can also be the key to tackling tax evasion at its root. Considering CBDCs as causing a financial earthquake that could pose long-lasting repercussions is also worth considering, since they are a disruptive technology. 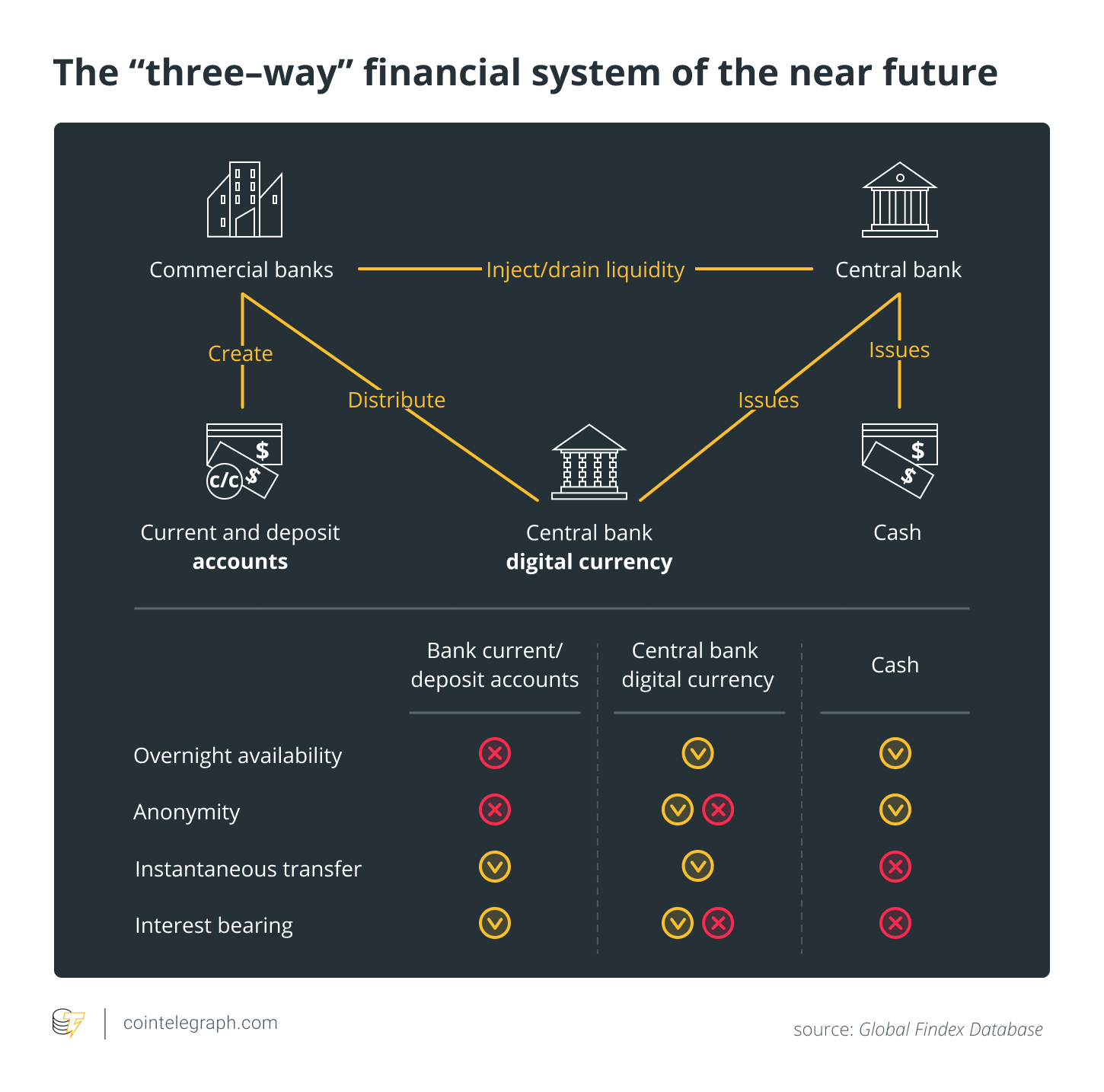 The best solution that minimizes negative spillovers is likely not the elimination of cash or the total disintermediation of banks, but a “three-way” financial system in which various payment systems coexist in equilibrium, balancing the needs of all economic participants.

The views, thoughts and opinions expressed here are the author’s alone and do not necessarily reflect or represent the views and opinions of Cointelegraph.

Marcello Minenna is the director of the quantitative analysis and financial innovation unit in Consob (Italian Companies and Exchange Commission) — an authority of the Italian government responsible for regulating the Italian securities market — as well as an adjunct professor of stochastic finance at the London Graduate School of Mathematical Finance and at Luigi Bocconi University of Milan. He is an economic and financial columnist featured in leading Italian and international publications.