Cardano celebrated the launch of the Shelley incentivized testnet, as it debuted with hundreds of pools and over 2.6 billion ADA staked. The testnet currently has 281 staking pools, which is 10 times more than EOS’s 21 and Tron’s 26.

After months of anticipation, the incentivized testnet for the Shelley era of Cardano finally went live. With a week-long test run between a trial balance check and the real network snapshot, the company and its team were focused on creating a solid foundation for testing out the network’s staking protocol.

Charles Hoskinson, the CEO of IOHK, Cardano’s parent company, said that the team hopes the incentivized network’s 1000 pool hosting capability will be fulfilled. And while the number might have sounded a bit too ambitious at the time, the incentivized testnet for Shelly debuted with metrics that show that it’s not just possible, but closer than ever.

According to IOHK, less than 24 hours after the staking pool setup was enabled on the incentivized testnet, more than 120 pools were onboarded. 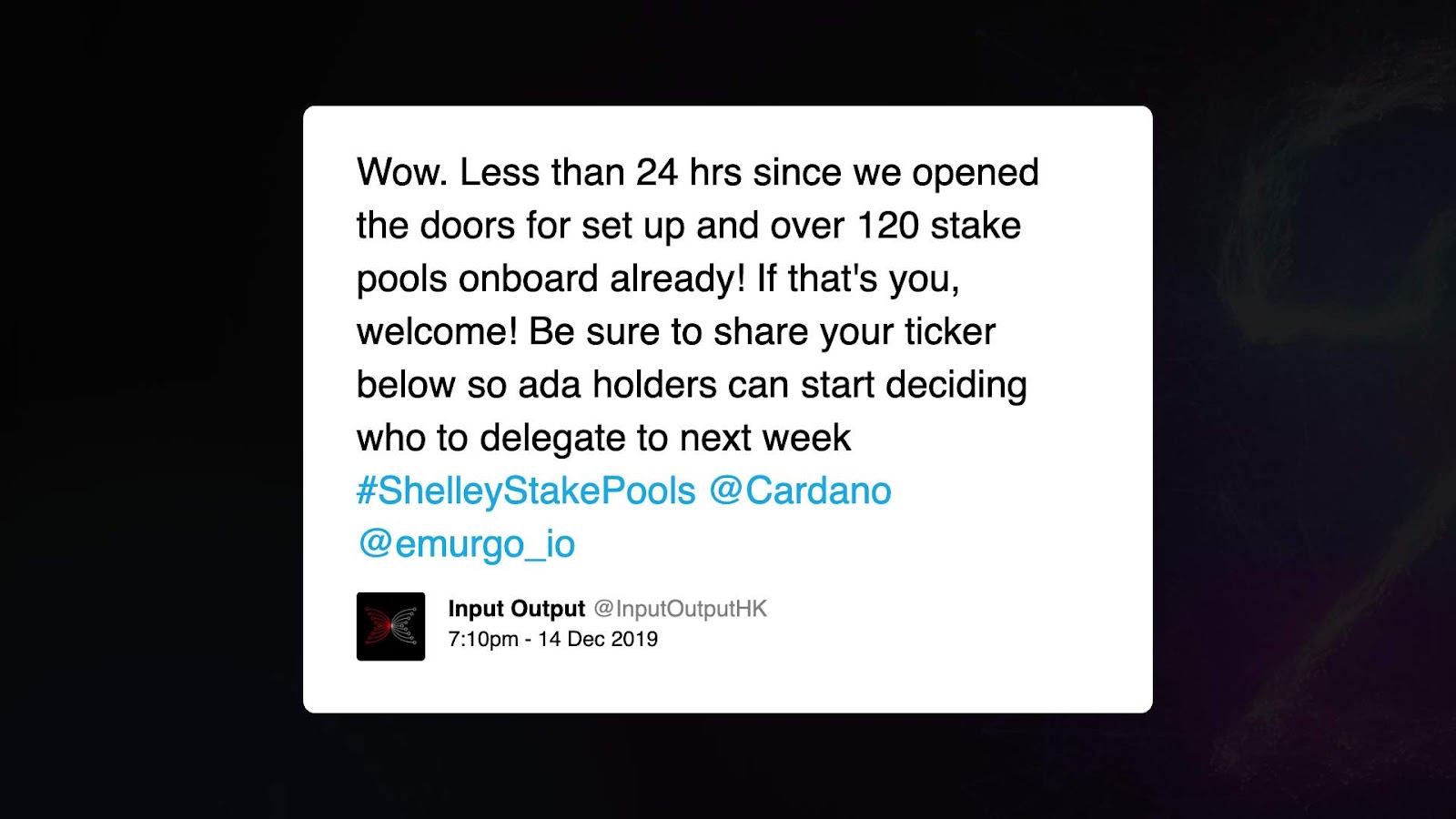 However, that number more than doubled since Dec. 15, as data from ADAPools has shown that there are 281 staking pools at press time. If the number of pools keeps its growth rate, the network could reach its equilibrium with 1000 pools sooner than expected.

While still in its infancy, the Shelley era of Cardano show has the potential to outperform its older and more established PoS competitors. According to a tweet from Cardanians, a community-led Cardano news outlet, the Shelley incentivized testnet boasts 10 times more staking pools than both EOS and Tron. Bitcoin and Ethereum both have around 10 pools according to the tweet, which is 28 times less than what Shelley onboarded in just two days. 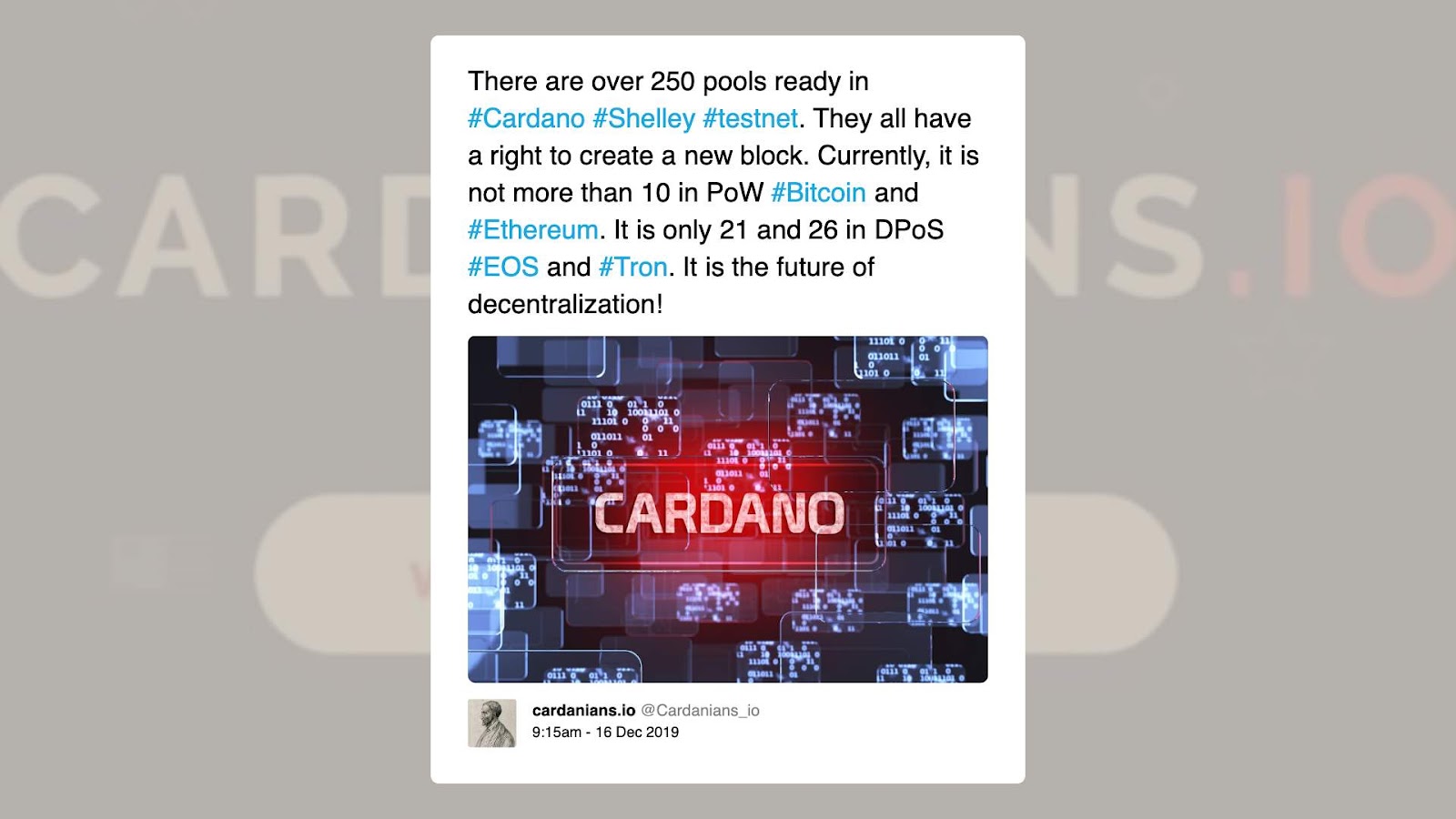 According to data from PoolTool, there is currently more than 2.6 billion ADA staked on the incentivized testnet for Shelley. With a circulating supply of around 25.9 billion, that means around 10 percent of all available ADA is currently staked on the testnet.

That number looks even more impressive when compared to Tron. With a circulating supply of 66.7 billion and 8 billion TRX staked, only around 12 percent of the available tokens are staked.

Cardano could surpass some of its competitors with its hefty staking rewards. According to the company’s rewards calculator, delegating 100,000 ADA, worth just under $3,600 at press time, would earn the user around 7.1 percent, or around $257, annually.

Running an entire stake pool is much more profitable according to the calculator. Delegating the same amount of ADA, while retaining 1 percent of the total stake in the pool and taking 10 percent of the rewards as an operator, could earn the pool more than 90 percent of its stake annually.

As the testnet progresses, the ranking of the staking pools won’t be based solely on their performance, as it will transition to a desirability-based ranking. That means that it won’t be long before a combination of cost, margin, pledged stake, and performance will determine the desirability of a staking pool.