As of the time of writing this, the cryptocurrency’s price has settled at $7,200, flatlining as investors decide in what direction BTC will head next. The thing is, there is no consensus: some say that since Bitcoin bounced off a historical uptrend, it is ready to enter back into a bull phase; others say that it’s poised to retest the $6,400 low, then collapse further to form a longer-term bear sequence.

Earlier this week, CryptoSlate reported that Bitcoin was on the verge of breaking below a logarithmic growth trend that has defined BTC’s secular uptrend for years now.

According to cryptocurrency trader Mr. Anderson, Bitcoin has defended the logarithmic trendline for the 16th time in four years as of this week, marking an important accomplishment for bulls. On Twitter he wrote:

“Bitcoin 4-year Log Trendline update: As mentioned, BTC was in the midst of a 15th test of a very clean 4-yr trendline Clean b/c drawn w/ coordinates from the base through the 2019 bottom it has ZERO weekly closes outside the trendline. Thus far, we have reclaimed intra-week yet again”

The defense of this trendline is notable, for BTC bouncing off it after a bear market drawdown is a catalyst that led to historical cryptocurrency bull markets. History repeating would see Bitcoin rocket higher from here, potentially to form another parabolic uptrend.

Not so fast; technicals signal caution

Although Bitcoin has defended a level that has defined the asset’s secular bull market, some fear that a move to fall under $7,000, to retest the local lows and aforementioned uptrend, is imminent.

Disk jockey-turned-crypto trader Scott “The Wolf of All Streets” Melker recently reminded his followers to “tread lightly,” asserting that investors shouldn’t get too caught up in the fact that Bitcoin bounced 10% from the local low.

Melker noted that two bearish divergences have formed between the BTC’s price and the Relative Strength Index (RSI), which largely show that the latest price recovery was “more like relief than reversal,” implying that a continuation to the downside has a decent opportunity of playing out. 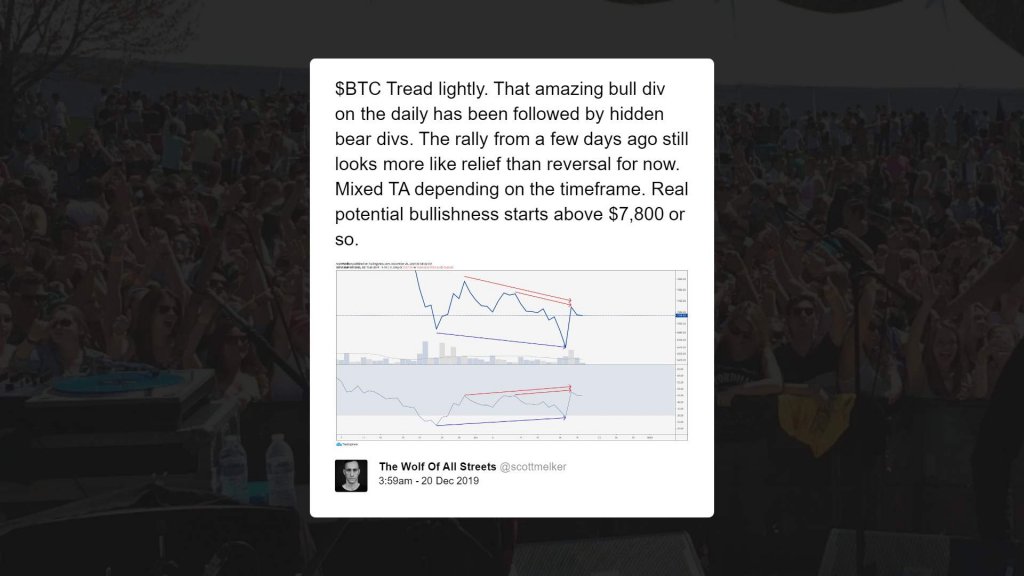 Cantering Clark, a prominent cryptocurrency trader on Twitter, recently remarked that Bitcoin’s price action over the past week is eerily reminiscent of what was seen in late-October, which was when Chinese leader Xi Jinping’s pro-blockchain comments seemingly were the catalyst for BTC to jump 42% to $10,000. Then, BTC bounced then slowly bled out, retracing all the whole run-up.

Noting this similarity, the analyst concluded that like in October and November, there is a good likelihood that Bitcoin will be seeing a “series of head-fakes,” then a “slow drift back down to the lows” of $6,400 to $6,500 in the coming weeks. On Twitter, Clark said:

“All I see is a weaker version of what we had before, because we likely have shorts that have been sitting in better positioning from earlier PA. i.e. Squeeze was less crowded = Less fuel Commence a series of head-fakes, and slow drift back down to the low.”